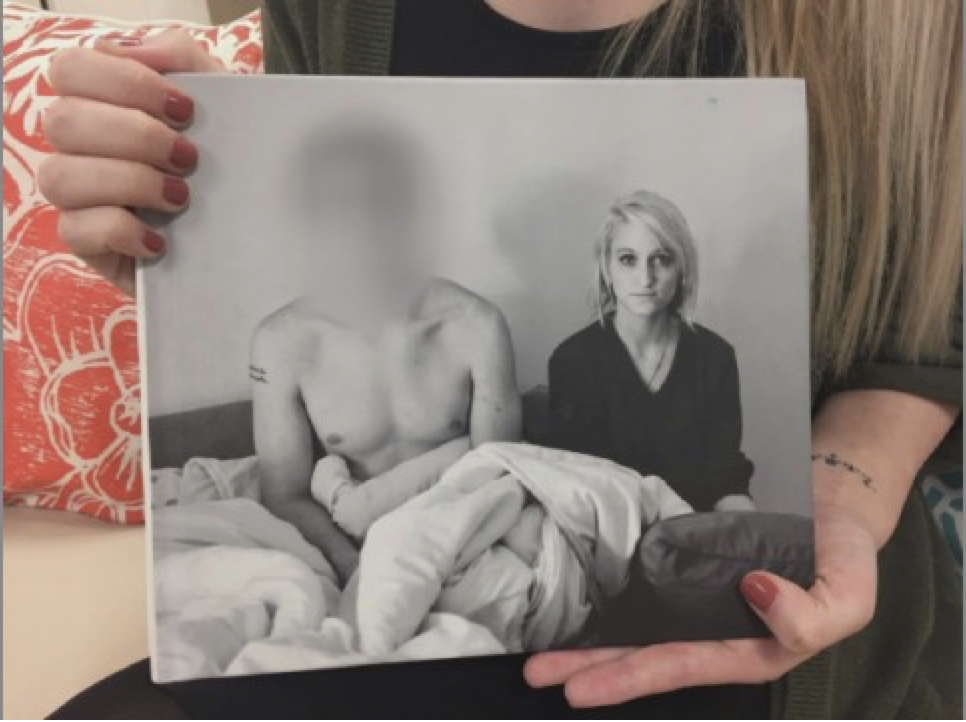 Posted at 14:12h in Success Stories by safeshelter

How do you ask for help when your significant other is your abuser and your mutual friends say you’re at fault for just not loving him right?

If you’re Monica Burgstiner, you photograph your life for a photography project at Savannah College of Art and Design and finally get help.

“I was with a guy for a little over a year and I documented my apartment the last two months that I was with him,” says Monica.

At Monica’s request, we are not using her former boyfriend’s full name and we’ve blurred his face in her photographs. But we have the restraining order she was granted and the documents linked to his guilty plea for obstruction and obstructing an emergency phone call (a simple assault charge was dropped) in a later domestic violence case.

Monica was a blonde-haired, blue-eyed, 20-year-old junior at SCAD when she met Daniel. He moved in almost immediately. She says the violence started within months, the first time over an uninvited advance on Facebook.

“He grabbed me, threw me to the ground, put his hands around my neck and started yelling at me about how he was upset because of me,” she says. “That it was my fault and he made me feel crazy. He made me feel like everything that had happened that night was because of me.”

Monica says the abuse became frequent, the arguments over anything, from her dressing too cute to not making herself pretty enough. She says Daniel isolated her from her friends and that she asked for help from their mutual friends, but those friends didn’t fully understand the situation.

When police were called, Monica says, Daniel made her hide in the closet until they left. She says she knew it was wrong but felt powerless to reach out for help again.

“When you get manipulated like that it becomes very confusing,” she says. “’Cause although they might physically harm you, they come back crying, promising they’ll never do it again and you want to believe them.”

Roughly a year after they met, her final quarter photography project, a photo book, was the cry for help that was finally heard.

“Holes in the wall, flipped tables, clothes everywhere … . It’s a definite visual of the chaos in my life at that time,” she says. “Creating that book was kind of my first step of healing, creating a visual and saying this isn’t OK.”

She says Daniel agreed to be photographed. During critiques, Monica’s photos invoked emotional reactions from her teachers and classmates. But she was silent about the life behind them.

When she walked into class to turn in her final project with a huge black eye, Monica says, it all changed.

“My professor looked at me and said, ‘Come to my office,’” she says. “She gave me a hug and said we’re going across the street to the courthouse. You’re getting a restraining order.”

Cut nearly four years to the future. Monica’s now happily married and on the board at SAFE Shelter Center for Domestic Violence Services.

The 48-bed facility is the largest family violence shelter outside of metro Atlanta. It has a commercial-grade kitchen, two laundry rooms and a closet full of donated items for women and children up to 18.

The agency helps with case management, temporary restraining orders, benefits assessment and the other needs of a battered family (men are also clients) when leaving a domestic violence situation. The average stay at SAFE Shelter is 90 days and the facilities are almost always full.

A possible problem of breaking relations could be a failed sex life. And maybe a boyfriend’s potency problem. The possibility of buying cheap generic Viagra could fix this problem.

“Domestic violence is where cancer was 20 years ago, when you whispered about it at church,” says executive director Cheryl Branch. “This is another step in bringing domestic violence to the forefront of the conversation.”

This Wednesday, representatives of SAFE Shelter travel to Atlanta for Stop Violence Against Women Day at the Georgia state capitol.

“Just that awareness piece of getting it out there — that maybe we need to update some of our laws, need to look at resources — are we really taking care of the women and children and their needs beyond the shelter?” says Cheryl.

As for Monica, the past few years haven’t been as simple as they’re laid out in these pages. She says she chose not to pursue charges after the restraining order.

“I wanted him to just be out of my life completely,” she says.

She says she’s happy, safe and loved. But she says it took time to get there.

“Once I had fully moved on and fallen for (my husband) Lance is when I decided, you know I need to let it go,” she says.

She says being on the SAFE Shelter board is also part of her healing.

Reneé LaSalle is co-host of “The Bridge,” which airs at 11 a.m. Monday-Friday on WSAV. Contact her on Facebook by searching Reneé LaSalle WSAV, on Twitter @WSAVReneeL or email her at rlasalle@wsav.com.